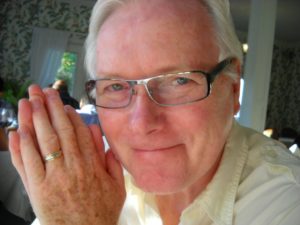 Philip Knox was born in Hamilton, Ontario and has lived in various cities around Ontario based on his father’s placements while working with the Federal Government.

After attending courses at York, Toronto, McMaster and Ryerson Universities, he began work in Theatre but switched directions and moved in to Behavioural studies along with Computer Technology which led to positions with Xerox Learning Systems, Honeywell, AT&T, Unitel, PSInet until he and his wife, Pat, started their own consulting firm in Toronto.

He and Patricia discovered Prince Edward County during a motorcycle trip around Ontario and determined it was time to get out of Toronto and head for greener fields.

Since then, Philip was volunteering at Milford fair and various PEC Community theatre organizations when a call came from Pat Larkin looking for help on Tuesday Grapevine.

Patricia’s prior involvement as a volunteer in administration with the station enticed Philip to agree to help out by doing programmed research, remote and on-air interviews, show producing and generally having a good time as one of the “Amigo Team” that provides education and consumer information on a wide variety of topics for 99.3 CountyFM listeners while working with the talented group of Dave MacKay, Sam St. Omer, Pat Larkin, Lynn Pickering and Deb Simpson.