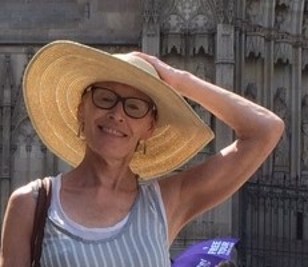 Joanne does news on Wednesday afternoon and volunteered with the radio theatre project.

Hi, Joanne Cullen here, a retiree from Toronto 3 years ago where I was marketing director of a national non-profit. As such, I know how important it is to volunteer for a cause that’s close to your heart – and 99.3 is very much this for me as my working life began in radio in my early teens as a ‘hitline’ girl at “The Big 8” in Windsor, a stint at their TV (CBC) station, then later in Toronto at Standard Radio CKFM. To say I LOVE the radio biz is an understatement – so had to introduce myself to 99.3 after tuning in and discovering the diverse programming, the best music genre mix anyone could hope for and focused support of the County community and residents. I came to 99.3 at first playing characters in two of their Radio Plays produced and launched in 2017/18 (their 3rd play was actually written by my husband who is quite the County history buff). All this led me to audition for a spot on the news team and now have a Wednesday afternoon time slot which I thoroughly enjoy – along with the amazing staff and volunteers I’ve come to know and work with.